Battle Ready for Genesis 8 and 8.1 Females The Savage | A makeup for the berserkers of the group. As the name implies, the ones wearing this makeup like to get close and personal in battle. The bloodier the fight the better. They fight first and couldn’t care less about the questions. When they come into the battlefield, pain is but a breath away. No matter the adversaries, the savage will never back down. The only way to stop them is to take them down… if you can.

The Celtic | This makeup was inspired by the Celtic "Tree of Life". As such, it symbolizes "strength, a long life, and wisdom". These markings are worn by those who hold the line and defend their base/family/village/leaders. They are the strongest yet most compassionate of their ranks. Like immovable trees, once they've dug their feet into the ground, it will take a huge force to push them even an inch, let alone break through them.

The Mage | Those who wear this war paint are capable of wielding arcane magic. Since they are few in numbers, you’ll find them heavily defended by a wall of Celtics. Whenever they step into the battlefield, the result is a huge number of casualties. Of course, since they do not have an infinite well of magic, they will only be called when the tables need to be turned.

The Tribal | Those with this war paint are known and used as scouts and vanguards. They are perceptive and adaptable. They can hold their own in a fight, but their role is usually to watch and spot weaknesses in the adversaries. If there's a hidden road to move their kin in order to gain an advantage, the Tribal will find them. Likewise, if their settlement needs to be move, they'll be sent out to scout ahead.

The Warlocks | These guys are incredibly rare and, therefore, are usually at the very top of the food chain. They can summon monsters to aid them in battle and are incredibly hard to take down. You will often find them heavily guarded, imparting orders down the ranks. If things seem dire, they'll step in and wreak absolute havoc. If they cannot win a fight, they will take as many enemies down with them as they can.

Also included are 3 Iray Emissive Material Presets and 2 Dirt Presets (Dirt and Grime) to give characters some grit which can be applied either via a Geoshell or as a LIE atop one of the War Paints for different blending effects.

Although the emissive materials had been designed to be used with the Warlock War Paint, you can certainly use them however you see fit, even as a stand-alone by applying it to a Geoshell. Whether to imply a character is being controlled by magic or being in control of magic, the choice is yours!

In total, you get 5 full-body War Paints, 3 of which include an Alternate Preset with a tweak on the paint. Additionally, we have included translucency, gloss, opacity, emission intensity, diffuse color changes, and other utility presets to further tweak and refine the overall look you are going for. The choices are endless! 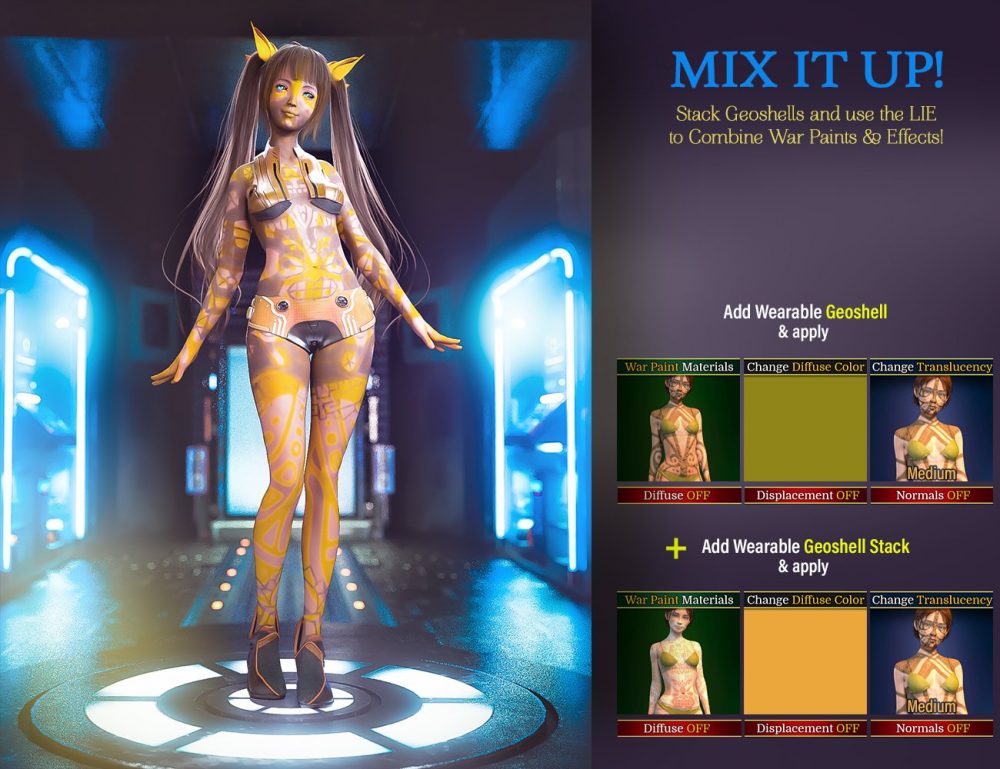