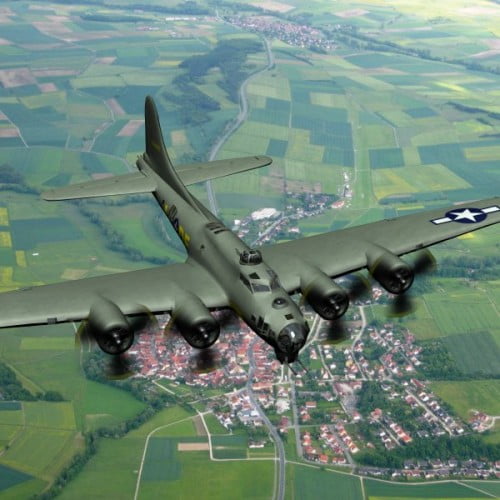 The B-17 was primarily employed by the United States Army Air Force (USAAF) in the daylight precision strategic bombing campaign of World War II against German industrial, civilian and military targets. The United States Eighth Air Force based in England and the Fifteenth Air Force based in Italy complemented the RAF Bomber Command’s nighttime area bombing in Operation Pointblank, to help secure air superiority over the cities, factories and battlefields of Western Europe in preparation for Operation Overlord. The B-17 also participated, to a lesser extent, in the War in the Pacific, where it conducted raids against Japanese shipping.

From its pre-war inception, the USAAC (later USAAF) touted the aircraft as a strategic weapon; it was a potent, high-flying, long-ranging bomber capable of unleashing great destruction, able to defend itself, and having the ability to return home despite extensive battle damage. It quickly took on mythic proportions. Stories and photos of B-17s surviving battle damage widely circulated, increasing its iconic status. Despite an inferior range and bombload compared to the more numerous B-24 Liberator, a survey of Eighth Air Force crews showed a much higher rate of satisfaction in the B-17. With a service ceiling greater than any of its Allied contemporaries, the B-17 established itself as a superb weapons system, dropping more bombs than any other U.S. aircraft in World War II. Of the 1.5 million tonnes of bombs dropped on Germany by U.S. aircraft, 640,000 were dropped from B-17s.

.: Product Features :.
A complete model featuring working turrets, propellers, undercarriage and flaps, as well as a basic interior.
All controls located on the body tab.
Prop blurs built into the model using switching geometry.
The model uses bump and displacement, and these should be enabled when rendering.

Textures:
Highly detailed and realistic textures, both diffuse and bump maps included.
The model is UV mapped and textured and scaled to Poser figures. Promo pictures rendered in Poser. 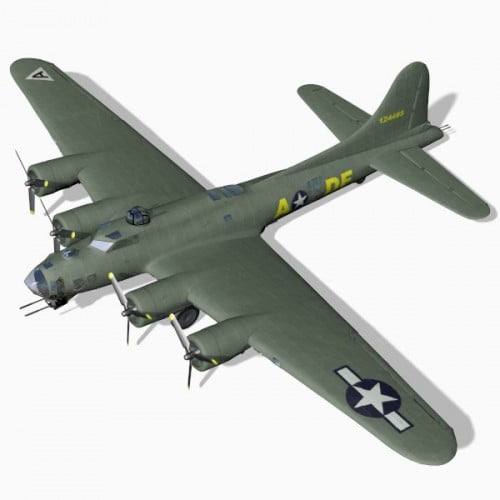