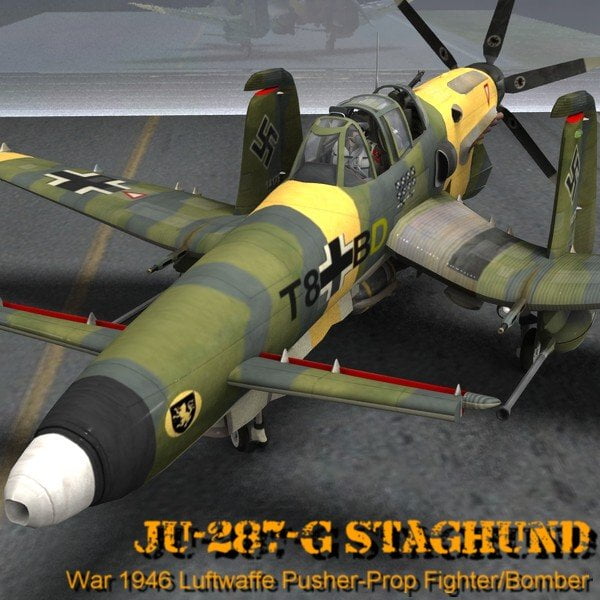 1946, France. With the war dragging on, the Luftwaffe looks to maintain a technologically superior edge over a quickly expanding enemy. With a stalemate on land and at sea, and the rise of Aircraft like the Pfeil as the fighters of the future, the Luftwaffe continues to explore advance replacements for it`s aging and out-dated air fleet.

First on the scene is the prototype Do-335 Pfeil, followed by it`s full production variants, then a series of improved prototypes based on existing aircraft for ease of production and inter-changeability of parts. To replace the very out-dated and aging Stuka Dive-bomber, the Luftwaffe adopts the Ju-287 Staghund. Based around a similar wing design and purpose but with a much more powerful engine and secondary water-injection booster, the Ju-287 marks a new stage in the airwar over Britain.

Finally arriving in combat production in May of 1946, the new Ju-287`s are first quickly dispatched to front-line units on the Eastern Front for full combat evaluation, in hopes of breaking the long stalemate against Soviet forces at Stalingrad.
Many historians (both amateurs like me and professionals) have long discussed and written about alternate what-if`s for the WW2 era. There have been a multitude of books, games and even movies based upon these ideas of alternate history. My designs are uniquely my own but are based on numerous prototype aircraft from the 1930`s and 40`s. Aircraft such as the Shinden, Ascender and Pfiel actually flew and were accepted for production but most were cancelled due to wars end. I present these as an alternative “what-if” where designs like this made it into production in a war that didn`t end in 1945. Look for additional products in this line coming soon!