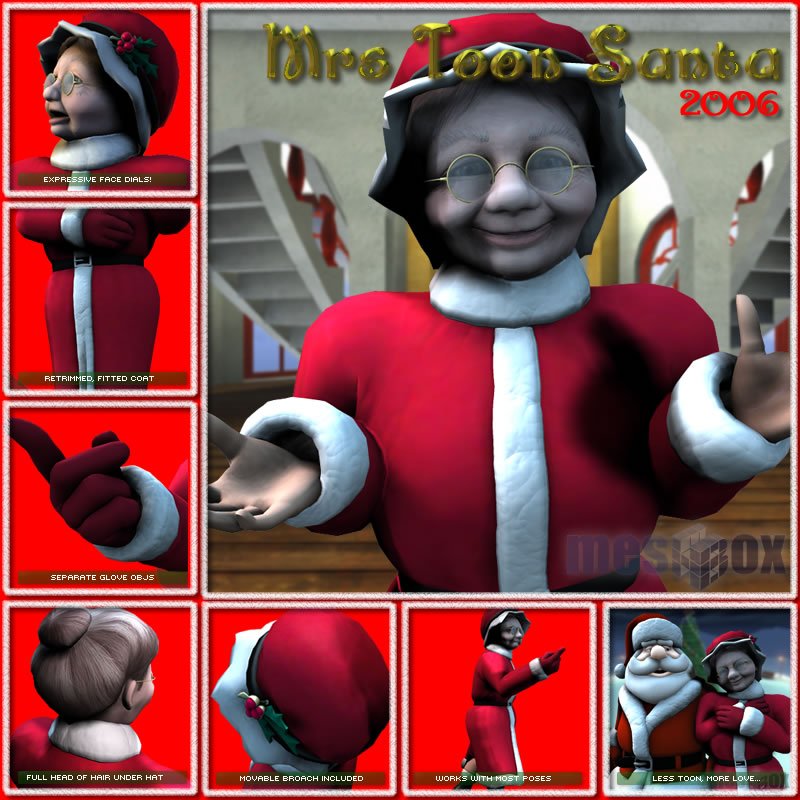 Mrs Toon Santa celebrates Christmas 2006! Mrs Toon Santa 2006 from Meshbox Design is the classic holiday character bringing joy and cheer to all, and companionship to Toon Santa himself! Mrs Toon Santa is for Poser 6 (works with Poser 5).Features * refined geometry with separate .obj and joint limits * New! Displacement maps on her hair and skin make Mrs Toon Santa her proper age * New! Baby Blue eyes peak out behind Mrs Toon Santa’s glasses! * New! Now Mimic compatible! * New! Separate OBJs of hat and gloves * New! Includes broach and eyeglasses! * New! Included .gifs of UV maps, allowing you to tweak Mrs Toon Santa to fit your needs! * Face Dials: Surprise, Blink (left, right, both), Lbrow Up & Down, Rbrow Up & Down, Brows Up & Down, OpenLips, Mouth F, Mouth M, Mouth O, Blink, PLUS Smile, Anger, Fear, Serious, Concern The Story of Toon Santa If you grea up in the 70’s in North America, you probably spent some quality hours in December watching the Rankin/Bass stop motion classics such as Santa Claus is Coming to Town, Rudoph the Red Nosed Reindeer, and a Year without a Santa Claus (and a selection of more religious programming). Rankin/Bass vision did not seem to translate well into the era of computer animation – the one attempt to make an all computer animated sequel to Rudoph didnt capture the warmth of the old Rankin/Bass classics. And Mrs Toon Santa Arrives… Mrs Toon Santa is here to keep Toon Santa company – someone also has to keep an eye on all those elves!