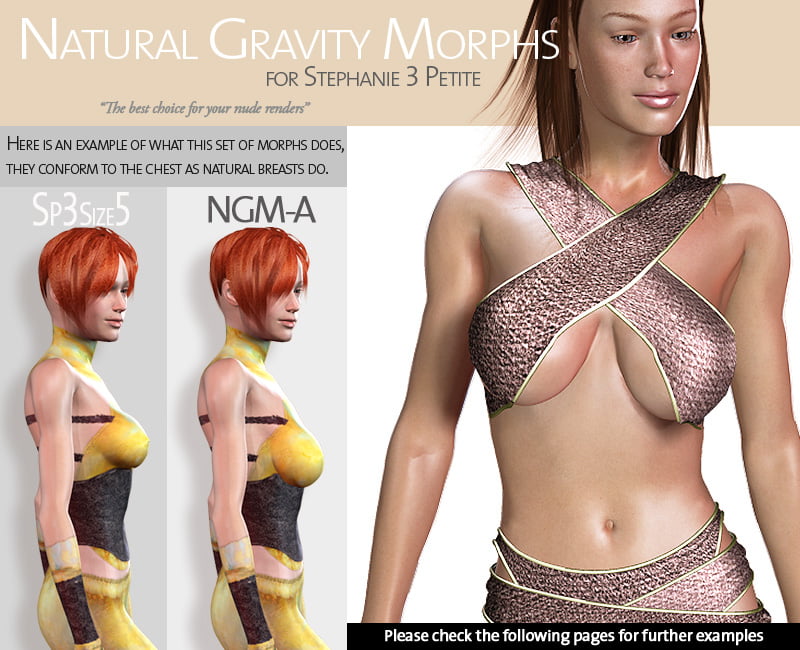 Natural Gravity Morphs for SP3 is a set of morphs that mimics the force of gravity on large breasts.

Big breasts in Poser figures usually tend to grow perpendicular to the chest, which in the real world?is impossible even with silicon implants. Breasts are soft and with some weight due to their size tend?to move down attracted by the gravity force; they move down conforming the chest as they grow in size.

These morphs do that.

NGM consist in a total of 11 morphs, 7 are “Seed” shape dials found in the body or the chest part and 4?are Aid morphs. The ones in the chest would allow you to save poses made with them right to the pose library.

These 7 “seed” dials represent the most common distribution of breast shapes at large sizes,?I called them “seed” because they are the starting point of new ones if you have the chest morphs of?SP3 then you could combine them and obtain more shapes.

These morphs are deceptively simple but they have a huge amount of work behind?them. Due to the way SP3 was designed in the collar-chest section by DAZ make this kind of morphs nearly?impossible, that’s why you see that most breasts morphs always make them point to the front like rockets.

To use them simply load your SP3 figure and double click on the !NGM-INJ pose file that you will find in?your pose library and the morphs will load on her.

In the NGM folder you will find also a Reset file, very useful if you have played with the dials and end?up with a nasty thing.

The seed morphs could be obtained either by moving the dials in the chest or Body or by using the pose files provided.

You will recognize the seed pose files because the thumbnails had a light gray background and a capital letter for each of them.

Along this you will find other set of thumbnails, this ones are extra shapes obtained by combining the Seed morphs, and
you will recognize this Derivative morphs by the dark gray background and by the lower-case letter.

Besides the 7 morphs dials you will find 4 extra dials the Aid morphs:

SoftNip: When you combine several morphs the shape of the nipple may look strange, this morph will soften it.

Bulge: This morph increase the size of the breast in the area between the nipple and the collar bone.

Bulge-2: This morph is similar than the Bulge but this will move both breasts slightly toward the center.

Soften_MidArea: Sometimes bumps would appear if too many dials are moved, use this morph to decrease them.

Extra care had been taken so the distribution of the polygons despite the morphs, remain compatible with
the SP3 morphs so you can combine them to obtain new shapes and sizes

NGM is a stand alone set of morphs for Stephanie 3 Petite, no other morph package is needed.