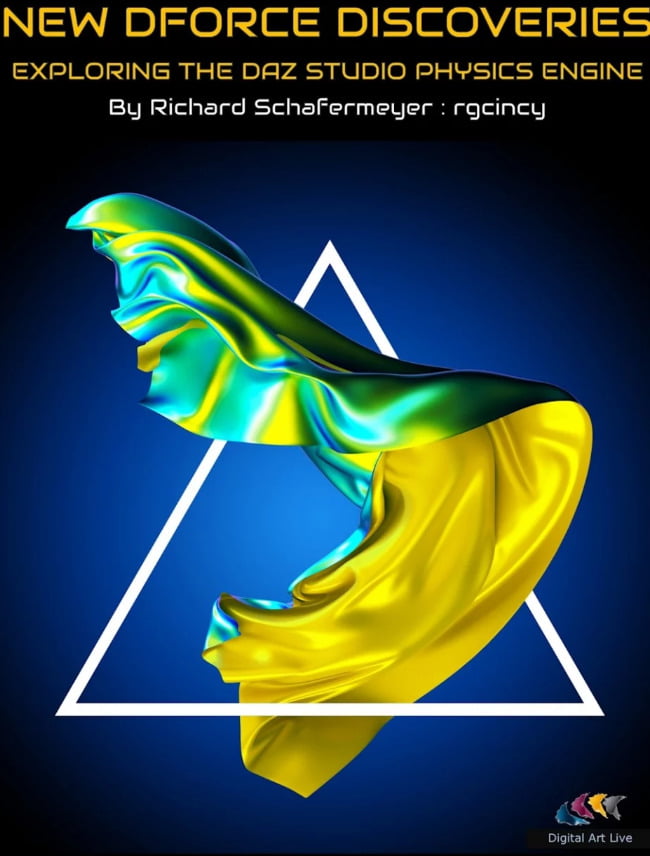 These dForce tutorials explore new discoveries made by Richard Schafermeyer (rgcincy) since his previous guide Powerful dForce Discoveries and Solutions.

In particular we show you how to deal with clothing not designed for dForce plus we teach “clothing in action” – how to show a character putting on clothing, or to have clothing out of place; in other words – messy real-world looking clothing!

Alongside the videos we have included PDF Document of Step-By-Step Instructions and a dForce Basics to get you started if you are beginning with dForce.

Part two of the seminar covers specific examples using dForce. These are drawn from the newer examples contained in Richard’s ongoing Daz Forum thread.
Most clothing for Daz is designed to fit as it is normally worn, so we’ll show examples where clothing is “out of place”.
Our live action, interactive webinar will make it easier to appreciate these more complex examples.
More case studies with dForce : using physics to provide realism<
6. Tips for Using Pre-dForce Clothing
7. Over-Sized Clothing
8. Loose fit Clothing
9. Stacked Clothing
About the presenter : Richard Schafermeyer (rgcincy):

Rich Schafermeyer is a long-time 3D Artist and Programmer. He got his start with the original Poser and Bryce 3D. In 2001, he wrote his first 3D Modeler that evolved into the still available Shape Magic. He began to use Daz Studio in 2012. With a Research and Engineering Background, the physics of dForce grabbed his attention! He decided it would be helpful to others if he shared his learnings and has frequently done so in the Daz Forums.
What’s Included and Features
New dForce Discoveries

3. Momentum transfer:
Definition and examples of momentum transfer
Example 1: A torus bouncing off another object
How to set up dForce with a sense of physics such as bouncing.
Example 2: Praxis’s example of bouncing a ball

4. Add-Ons dForce modifier:
This is one of 3 types of dForce modifiers
How the modifier can be used to create hems, stiffen collars, keep shirts closed yet show gaps between buttons, or even make a ball bounce.
Use a modeling program and a script to enable the above techniques.
About polylines (in Public Beta Daz 4.11)
More examples : holding a split cylinder together, holding a collar in place and a shirt front together.

6. Tips for Using Pre-dForce Clothing:
Can work great or not at all
Recommendations for Bend Stiffness and Stretch Stiffness.
Example: Merimay dress
Recommendations before setting up a complex scene
Add dForce modifier and a ground plane
Run simulation see if it falls and drapes without issues
Focus on parts of the clothing that don’t perform well (buttons, belt loops, collars, shirt pockets, etc.)
Recommendations on how to deal with these clothing parts.

7. Over-Sized Clothing
Have you ever seen children playing dress-up in adult clothing? You can create that effect using dForce!
Two examples to demonstrate this.

8. Loose fit Clothing
A lot of Daz Clothing is skin tight, not what you see in real life
How to use dForce to loosen the fit : socks, underwear, swim trunks and others.