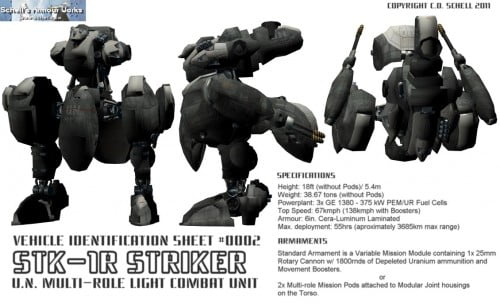 In the late 90’s, a boom in robotics and computer development led to an increasingly technological society, and by the turn of the 21st century, many nations had begun full research into functional robotics and A.I. technologies. By 2010 the Japanese, leaders of robotics technology development, had well-established programs for research and had unveiled ever increasingly versatile and functional machines. Military interest in robotics also grew in the 21st century, and by 2035 gains had been made on the use of both robotics and remote vehicles. This lead to the first use of “mecha” (short for Mechanized Troopers) in Military operations, deployed initially by the JSDF (Japanese Self-Defense Forces) “mecha” gained interest world-wide, eventually leading to the formation of specialized “Mecha-Trooper” units in almost every country that could afford them.

By 2065, Mecha-Troopers had become a standard part of mixed Armored Cav units. Powered by Fuel-cells (much like those used in electric and hybrid cars), electronic/hydraulic servo-motors and hydraulic rams, the “Mecha-Trooper” is slightly slower than most regular armored vehicles… but much more versatile. With a much longer range than most Tanks or AFV’s and with heavier armor and firepower than an IFV (Infantry Fighting Vehicle) they work incredibly well to fill the gap between the two. Adaptable and with a modular design, the older variants (though smaller) can be outfitted for a variety of roles. The latest versions even being manufactured with “hand” style manipulators allowing them to carry weapons rather than having them in-built, giving an even greater multi-role capability on the battlefield.

The STK-R1 Striker is an older model Mecha-trooper, originally designed and produced in the mid-2050. Though not as capable as current models, the Striker is still in regular use with the U.N. Mechanized units as well as with the Military organizations of many countries. In standard practice, this Mecha-trooper occupies much the same role as a Light Armored Vehicle, supporting Infantry units and providing Anti-vehicle support. With its modular design, there is no standard ?built-in? armament. Instead, it can swap out weapons packs at need for whatever mission has been assigned. These weapons are carried in pods, much like ?arms? on the Mech, which connect through ?quick-change? mounts on the torso. A well-trained ground crew can have a full weapons swap completed in about 30 minutes in battlefield conditions! This quick swap-out of pods is what has kept it in service along side newer Troopers units?