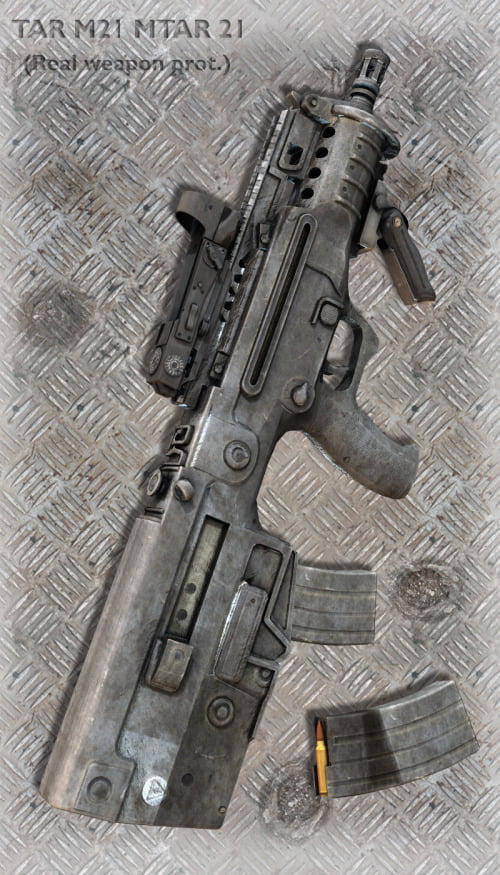 The development of the new assault rifle, that should eventually replace in service the ageing M16A1, CAR-15 and IMI Galil assault rifles, began in Israel in the 1991. The new rifle was developed by the Israel Military Industries (IMI, now privatized as IWI – Israeli Weapons Industries Ltd) company, in close cooperation with the Israeli Defense Forces (IDF). This new rifle received the name of “Tavor” and the designation of TAR-21 (Tavor Assault Rifle, for 21st century). The new rifle first appeared on public in the1998,and it had been tested by the IDF during 1999-2002. Initial issue of Tavor rifles to IDF showed some teething problems, but by now the Tavoris already in widespread use by IDF, and it seems that many earlier problems are worked out. It is also in limited use with Special Operation forces of India and Georgia.

In general,the TAR-21 represents the mainstream of the present assault rifle developments. It shares all the “modern”features, already tried and proved successful by previous designs, like the bullpup layout, polymer housing, optical sights as a prime sightinge quipment,modular design with several different configurations (from very short submachine gun and up to standard assault rifle and a para-sniper accurized rifle with heavy barrel). So far it seen not much real action, and it is hard to judge if it is really a success, and only time will show that.

The IWI also developed and manufactures a civilian, semi-automatic only version of the Tavor rifle, which looks much like the Tavor Micro rifle but with longer barrel. This version has already been exported to several European countries and Canada.

The Tavor TAR-21 is a gas operated, selective fire, magazine fed assault rifle of bullpup configuration. It is available in several configurations,which differ in the barrel lengths and accessories. The basic configurationis the TAR-21 assault rifle with the 460mm (18.1 in) barrel. Next are the compact assault rifle, called CTAR-21, with the barrel 380 mm (15 in) long, and themicro assault rifle, with the barrel of only 330 mm (13 in) long,called MTAR-21. The latter rifle also featured a redesigned front part of the housing, with charging handle placed further back on receiver,for a more comfortable hold of the short weapon. Micro-Tavor also can be converted to 9mm pistol ammunition (9×19) with installation of the caliber conversion kit, which includes a new barrel, bolt group and a magazine adapter.
TAR-21 utilizes a now-common long piston stroke, rotating bolt action, with the gas piston rigidly attached to the bolt carrier. Gas cylinder is located above the barrel and is completely enclosed by the gun housing. The rotating bolt is similar to one found in the M16 rifle and has seven lugs. The ejection ports are made on both sides of the weapon, and the right or the left side ejection can be selected by installing the bolt with the ejector mounted on the right or on the left,respectively(and, of cause, this change requires the gun to be partially disassembled). The bolt carrier rides on the single guide rod, with the return spring unit located above it, behind and inside the hollow gas piston rod. The charging handle is located at the front left side of the gun and does not reciprocate when gun is fired. The charging handle slots are cut on the both sides of the gun housing,so it can be installed on either side of the weapon, as required. The trigger unit is more or less conventional, with the ambidextrous fire mode selector /safety switch located above the pistol grip.
The TAR-21 has no separate receiver. Instead, all parts are mounted within the high impact-resistant plastic housing, reinforced with steel inserts where appropriate. The access toall the internal parts is controlled by the hinged buttplate, which can be swungdown for internal inspection and disassembly.
Early production TAR-21rifles had no open sights, but this has been fixed with introduction ofthe folded front and rear sights on current production models. Tavor rifles are fitted with the standard Picatinny-type accessory rail on the top of thegun. Early guns had Israeli-made ITLMARS as standard sight, which is a complicated and expensive reflex-type sight with the built-in laser pointer. For the night time operations the MARScould be complemented with the ITL Mini N/SEAS compact night vision device. Current manufacture Tavor rifles (except for Sniper version)are usually fitted with less expensive Meprolight red-dot sight. Snipervarsions usually are fitted with Trijicon ACOG optical sight with 4X magnification.
The TAR-21 utilizes the STANAG-compliant, M16 type magazines, with standard capacity of 30 rounds.
TAR-21 in its basic configuration can be fitted with 40mm M203 underbarrel grenade launcher. 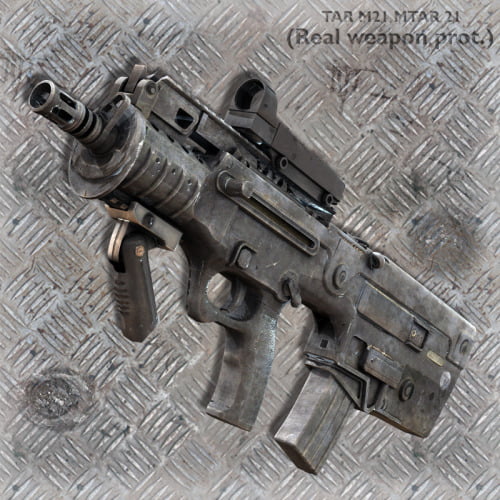