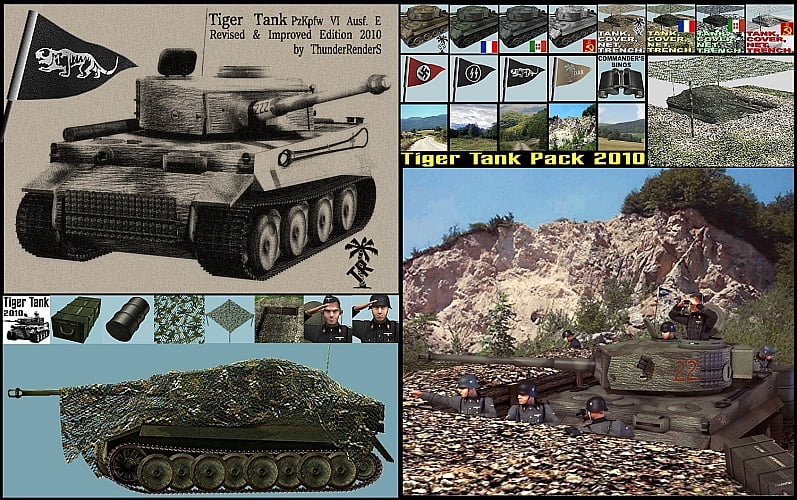 THIS PRODUCT WAS NOT TESTED IN DAZ STUDIO AND 3D APPLICATIONS OTHER THAN POSER.
FOR USERS OF OLD “TIGER TANK” PACKAGE: COMPLETELY DELETE ALL OF THE OLD FILES BEFORE INSTALLING THIS PACKAGE!
(they will be in your :light:TIGER LIGHTS, props:TIGER TANK, and textures:TIGERTANK folders)

ThundeRRenderS proudly presents fully redone “Tiger Tank Pack 2010”.
Tiger body is now a figure with turret, muzzle and antenna as parented props. This is why:
When it comes to animating/positioning the parts as if the tank was blown away by heavy artillery this feature will come in very handy! Also, some Tiger variants had the antenna placed in different positions. Or, perhaps you want to remove it? No problem. This feature allows you to animate/position the parts of the tank during the factory assembly phase as well. There are many other uses as you can imagine.
One morph on the tank body will alter your preference for steel cables placed on top or on the sides of the body. This morph will also load/delete the traction (wooden) log on the top right side of the body. Another morph will place/remove spare tracks affixed to the front side of the tank body.
One dial raises/lowers the muzzle and another dial rotates the entire turret 360 degrees.You can apply “limits” to the figure which will accurately block the movement of the muzzle and turret at certain degrees.Both hatches open and close on the turret, through morphs.
Two human torsos are included as well: Tank Commander (with 16 morphs) and a Crewman (with 10 morphs). You can multiply them and pose them around the tank in a trench (with some surrounding rocks and vegetation) which is also included.
The trench has two morphs to simulate either boulders/rocks, sand dunes or snow.
One camouflage cover for the tank is included as well as the (anti aircraft) camouflage net which both render with convincing transparencies and cast Raytraced shadows through FireFly render engine.
Additionally, you will find a tank shell crate (prop) with removable rack inside, containing four shells. The crate has two morphs (1-open/close and 2-rope handles raised for carrying or relaxed).You can use your imagination and load many crates with or without tank shells and pose them open or closed all over the trench or you can use them for some other war-scenes.
A fuel barrel prop is included as well.
A small antenna flag loads at the top of the antenna and has four textures which can be altered through provided Pose presets.
The tank itself has four different textures. The crewmen have three different textures.The trench has four different textures and so do the matching camo cover and camo net. The background plate is included with seven presets. The textures can be altered individually but there are presets provided to apply correct textures for the entire scene.For this to work you need to have the tank figure in the scene. For example:
Load the tank first,then the crewmen, the trench, the camo cover and the camo net. With a click on one of four included Pose folder presets, you can set the entire scene for the winter, desert, rocky or forest terrain for all of the mentioned objects. This will greatly speed up your posing process.All of these props are scaled for the tank and they load to their respective places so you don’t have to worry about re-scaling them. You can then (un)parent as you wish. All objects are also scaled for Poser humans (like Don, Michael etc.) and for other packages from ThundeRRenderS.
The commander has binoculars as part of his body but the same pair of binoculars is also included as a standalone prop for you to use in your scenes.
Two light presets are included as well!

Now examine the presentation pictures and get ready for some TIGER ATTACK!
More stuff that you can’t find anywhere else (especially for a such a great price!) is coming right up, so please, leave a good review for this product! Thank you all for your wonderful feedback and suggestions which made this product possible!
A lot of hard work has gone into it.