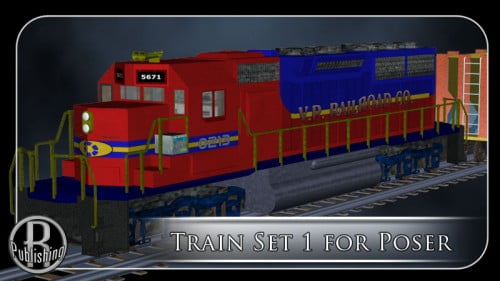 You’ve ridden them… you’ve watched them roll across the landscape… you’ve played with them… now build your own virtual train set with this first pack of train cars! That’s right- now you can build train layouts (and render your own images) from within Poser. These are no ordinary, bland, train cars- they were specifically designed for you, the Poser artist: simply purchase the product, extract the files, open Poser, and you’re all set!

.: Textures :.
– All models come with superb, detailed textures with more free textures to be released later.
– All models come with MAT poses to quickly apply the textures- there’s no need to manually browse for texture files.
– All texturing is compatible with Poser 4… though there are some extra details when you load it in Poser 5 (and above). Not to worry… even though Poser 4 will safely ignore this information, there will be no significant loss of detail.

.: Features and Benefits :.
– All models are Poser figures
– Like all Poser figures, when you extract these models, they are added to your Figures Library and you are ready to go. There is no need to fiddle around with any import options.
– These models are perfectly scaled to the Poser people. There is no need to fiddle with the scale and translate dials to resize the model.
– All of the train cars include moving parts, such as rotating wheel carriages and opening and closing doors. Imported 3ds and obj files can not have moving parts.
– Like all Poser figure files, these models accept pose files: both position files and MAT poses. This means, that when you can make your own textures, your MAT pose to apply the texture will work fine. Imported 3ds and obj files can not accept MAT poses.

All models are optimized for use in Poser
– The train car models range in size from 15,005 and 20,791 polygons. You will not find any models that were meant for use in Lightwave or 3D Studio Max and which have over 100,000 polygons. (Or in some cases, over 500,000 polygons!)
– Each model contains easy-to-understand material names in English, such as “Exterior” and “Interior”. You will not find materials with names such as “Abbax_1” or “auben” or “panneaux lat?raux”.
– Each model uses logical material names for the surfaces, such as “Exterior”, “Glass”, and “Ladder”. You will not find materials with names such as “Material_1” and “Material_2”.
– Each model uses “material conservation” and uses as few materials as possible. Unlike models designed for use in Lightwave or 3D Studio Max, these models do not use 20 surface materials just to cover the “Exterior” section.
– All models were built with 3 and 4-point polygons. There are no multi-point polygons to cause potential rendering issues.
– All models use externally-referenced obj files. This saves memory resources since Poser can load the obj file without having to re-create the model’s geometry each time it’s added to the scene.
– All models were tested in Poser 4 and Poser 6, but will work perfectly fine in Poser Pro Pack, Poser 5, Poser Artist, and should work fine in all future versions of Poser. The models may work in Poser 3, but we are unable to test this… and we recommend that you upgrade to at least Poser 4.
NOTE: Even though the obj files can be used in other graphics programs, we do not actively support the usage of the models in any software other than Poser. We will try our best to help you, but we can’t guarantee that we’ll even have the same software as you.

.: The Rails :.
The railroad rails found in this product are accurately scaled to the US standard gauge of 4 ft, 8 1/2 inches (the width between the top of the rails). The length of the rails has been “fudged” very slightly: the exact length of standard rails is 39 feet, which translates to 2.925 Poser units… the rails in this product are rounded off to exactly 3 Poser units long. (This means that you, the user, can simply move the rail model by 3 units and it will line up with another rail model.)

The “US standard gauge” size dates back to the original railroads, and some people claim the size dates back to the time of Roman chariots!
But, no, there is no truth to the legend that the US’ space shuttle’s solid rocket boosters (SRB) were designed to be the same width as railroad rails… and, in turn, the same width as the Roman chariots. Yes, the SRB’s are moved on trains, but they’re designed to fit through train *tunnels*, which are significantly wider than the rails’ width of 4 ft 8 1/2 inches.

NOTE: The Wirefusion models are shown with rails beneath the train cars. Rest assured that the rails are a separate figure and NOT modelled onto the train cars. 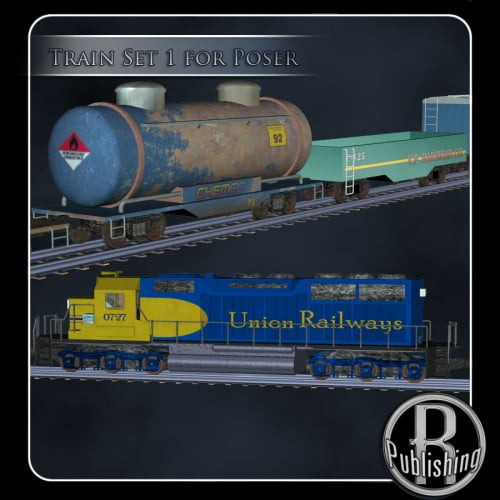