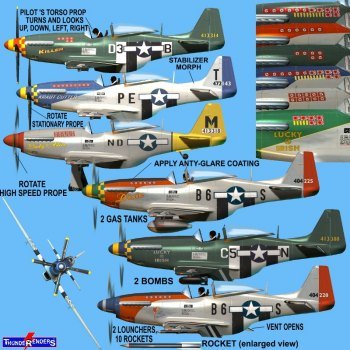 A COMPLETE “WW II AIRPLANE” PACKAGE WITH ALL THE OPTIONS, MORPHS AND PROPS YOU NEED TO PRODUCE A CONVINCING HIGH-END RENDER EVEN WITH POSER 5’s PREVIEW RENDER SETTINGS!

And here’s why: The landing gear comes out, the flaps move, the tail-fin moves, the ventilation/cooling door in the bottom opens and the canopy slides open! The wing-striping patterns can be applied idependently from the main body textures. The nose of the airplane has several “Pose folder” presets but can be colored and/or ring-striped independently. The, so called “NOSE ART” is layered through nodes in “Material Room” and so are the tail markings.

What does this mean? A huge versatility! Even if you have a huge aircraft formation, no two aircraft will look alike! Even the 3 or 5 craft formation of the SAME TYPE of the aircraft will show personalized and customized planes since the tail serial numbers can be altered through the “Pose folder” presets! There are 2 removable propellers( blurred high-speed and/or stationary) and they can be rotated. So you can animate the plane on the runway (with engine starting up) or in the air (engine in full throttle). If you remember the moving flaps and the retracting landing gear then you realize the potential for a great looking animation. The pilot’s torso is a separate prop as well! He can turn his head up, down, left and right and his hands are holding the aircraft’s flight stick. Since this craft is a two-seater, you can put two guys in the cockpit! He also has a face-morph, which means: the two guys won’t look alike! The best range of motion for any morph is from 0.000 to 1.000.

Click on the dial and type: 1 and hit Enter. You’ll instantly get the morph to its maximum value! The wing attachments are separate props. You can choose 2 rocket lounchers(with 5 rockets parented to each) or 2 huge bombs. You can also choose extra gas-tanks.The cool thing is: the plane itself is scaled and posed for Don (Poser 5) so you can pose HIM to pilot the craft easily. Also, if you don’t move the plane upon loading, all props will fit perfectly when loaded! If needed, you can reposition them, delete what you don’t need and parent them to the plane. This is useful i.e. if you put the plane into a nose-dive with rockets shooting in front of it. You can apply the “panel transparency” preset to the front of the plane and load the provided airplane engine prop into it! Another useful prop here is the hangar. It has 2 sets of (dial-operated) sliding doors.

Its interior is textured, the walls have pictures and postings, even a pinboard with photos and diagrams.Naturally, the hangar has been scaled and posed for the airplane. With 2 camera presets and 2 light presets as well, you can now see that a complete package like this one SIMPLY CAN NOT BE FOUND ANYWHERE ELSE! 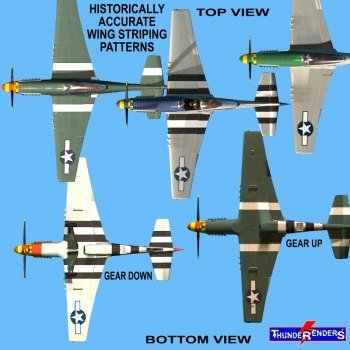