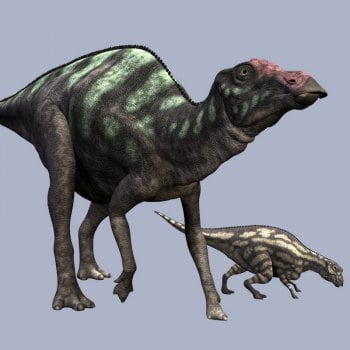 Maiasaura (from the Greek, meaning “caring mother lizard”) is a large duck-billed dinosaur genus that lived in the area of Montana in the Upper Cretaceous Period, about 74 million years ago.Maiasaura was large, attaining an adult length of about 9 meters (30 feet). This dinosaur was herbivorous.
It walked both on two (bipedal) or four (quadrupedal) legs. Maiasaura lived in herds, extremely large and could have comprised as many as 10,000 individuals. It raised its young in nesting colonies. The nests in the colonies were packed closely together, like those of modern seabirds, with the gap between the nests being around 7 metres (23 ft) – less than the length of the adult animal. The nests were made of earth and contained 30 to 40 eggs laid in a circular or spiral pattern. The eggs were about the size of ostrich eggs. 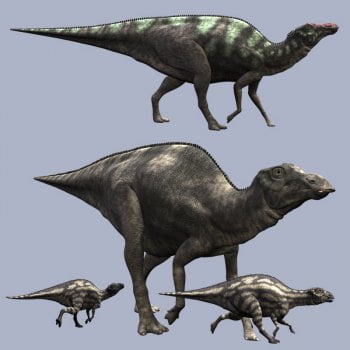