Render Queue 3
Queue up your renders, sleep while you work!

The Render Queue enables you to render many scenes in sequence, unattended, allowing you to do your renders overnight without having to sit next to your computer to start each render by hand.

When you are done working on a scene in Daz Studio, you can add it to a queue, set a target image file name, and work on the next scene. When you are done with your day's work, you can launch the queue, go to sleep, and admire your renders the next morning. You can even tell the Render Queue to shut down your computer when it's done rendering!

The Render Queue was my first product in the Daz Store, originally published in April 2019. It has been very popular. This version 4.20 is a substantial rewrite: even though the core features are still recognizable, it adds a lot more:

1. The Render Queue is now a pane (tab), and you can drag and drop your scene files onto it.
2. There can be more than one queue: each is a JSON file on disk, and you can keep as many as you want and open and close them.
3. The progress window is now much more detailed and gives you an "estimated time remaining" for the entire queue.
4. You can render icons and tips for scenes, and for entire asset icon sets (for example, for pose sets or materials).
5. Rendering animations (entirely or in chunks) is now supported.
6. The Render Queue can automatically dismiss Daz Studio error messages (e.g. "missing files") during scene load to be able to keep going unattended instead of waiting for you to click a button.
7. If you know Daz Script, the plugin now has a scripting interface! (Beta status)
The old Render Queue always restarted Daz Studio after each render; the new version makes that optional, and the feature is disabled by default. You can turn it on again though, and you can even tell the plugin to only restart Daz Studio after a certain number of renders.

Note: This product is for 64-bit Windows only, and it renders Iray only. 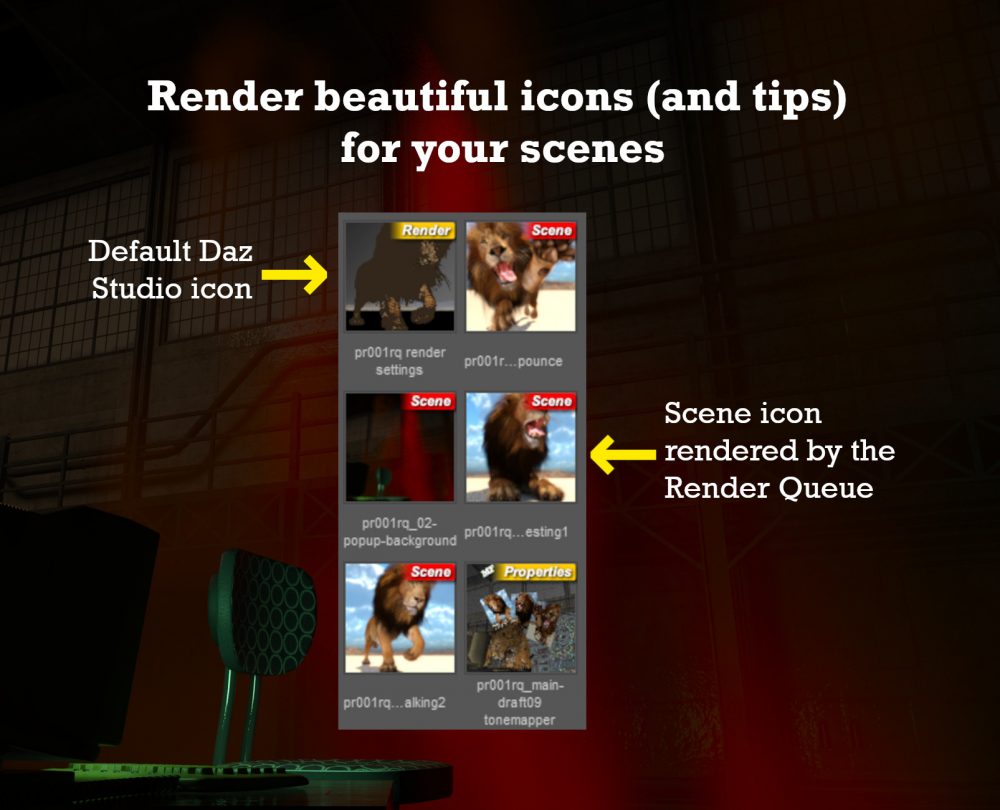